Should You Eat Back Calories Burned For Weight Loss? 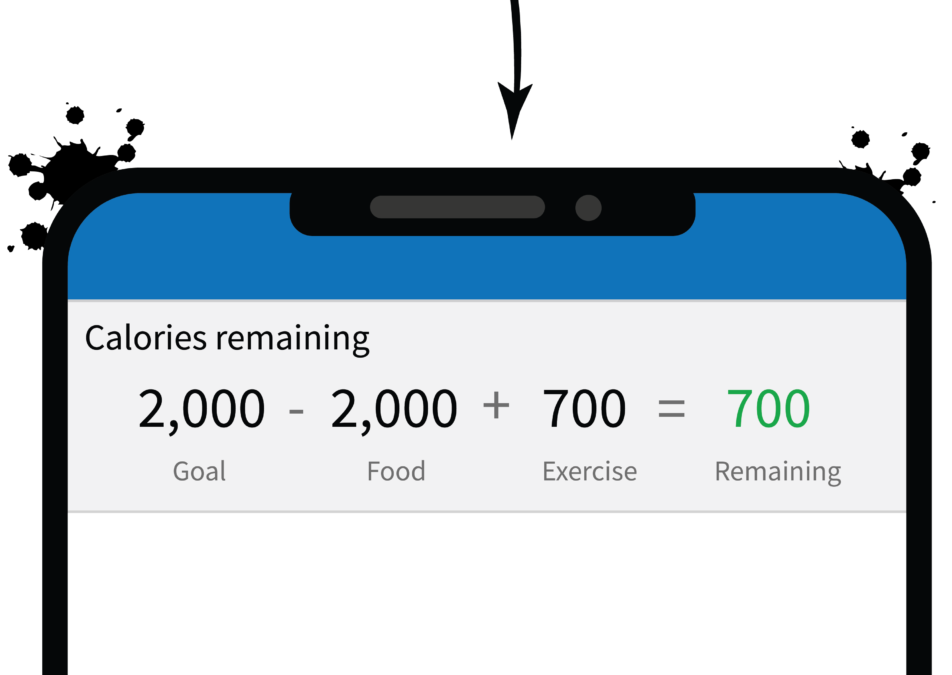 The rain was driving into your face, cleansing the stress of your day.

As you pull up to the finish of your run, you glance down at your watch.

So the big question is, does this mean you get to add a 677 calorie meal as a treat for running?

Well, if you want to lose some weight, you might want to read on.

Don’t just read the headings, and skim your way through.

Read every word, so you don’t miss important information.

Before we dive in, let’s have a discussion on how weight loss actually happens.

There is only one way to lose body fat.

It’s by taking apple cider vinegar while washing it down with a detox tea.

Just kidding, that doesn’t work (it is a great way to accidentally shit your pants though).

The only way to lose weight is to eat less calories than you expend.

This is called a calorie deficit (you may have heard the term once or twice, but if not that’s okay, you can learn more about it here).

This is what’s referred to as your maintenance calories.

This is called a calorie surplus.

A calorie is a unit of measurement for energy.

How many calories in your food is simply how much energy is in it.

Your body uses the energy to make your heart beat, your liver function, to walk, to exercise, or to get freaky (nice)

Any energy that your body does not use for the above activities get stored as fat.

So when we talk about calories burned, we are talking about how much energy you are using.

When you go do a HIIT workout, lift some weights, or get freaky (still nice), you are expending energy, or… burning calories.

Logically speaking, burning calories through exercise would change this balance.

So, should you eat back your calories burned for weight loss?

First off, I want to say that the only way to accurately measure calorie expenditure is in a laboratory.

The piece of technology on your wrist that makes you look like a Spy Kid can’t do that.

But I can also cite this study which investigated energy expenditure among 62 participants performing various degrees of intensity of activity.

The study found some pretty lackluster results with a mean absolute percentage error varying between 16.85-84.98%.

Especially if you think you burned 600 calories and it actually means you burned 120.

Which would mean you’d eat an extra 480 calories, which is pretty damn significant.  That’s almost an extra Big Mac’s worth of calories.

But Nick, we spend so much money on these devices, why aren’t they accurate?

A valid question that I’ve put in your mouth…

Every person on the planet Earth is different.

That means we all expend calories in different amounts.

This can be based on several variables.

Unfortunately, your Apple Watch does not know how much lean muscle mass you have.

How many calories do you burn through exercise?

Let’s break down how your body burns calories

Which is a fancy way of saying how many calories your body burns.

This is basically how many calories your body burns to keep your functions, well… functioning.  This number, just like every other number, is different per the individual.

20% comes from Non-Exercise Activity Thermogensis (NEAT), which is a really fancy way of saying how many calories you burn through unintentional movement.  You know that kid in 2nd grade who was fidgeting all the time?  That kid burned a lot of calories through NEAT.

15% comes from the Thermic Effect Of Food (TEF), which is the calories your body burns just from digestion.  Digestion takes energy, so just by eating calories, you burn a small percentage of those through the digestion process.

5% comes from Exercise Activity Thermogenesis (EAT).  So yeah, that’s that run in the rain you did.

It accounts for a measly 5% of your daily calorie burn.

Most calorie calculators (my favorite one is here) are already accounting for calories burned in the calculations.

If you’ve ever used a calorie calculator to figure out how many calories you should be eating (in my opinion, you absolutely should), it will probably ask you how active you are.

And that, my dear friend, is taking your activity into account (this includes NEAT and EAT).

The best you can.

Because as mentioned above, calorie burn can only be measured accurately in a lab.  So we estimate.

So if you’re estimating yourself at an activity level of “moderately active” and then eating back calories burned by exercise, you’re negating the extra calories the calculation gave you.

And you probably won’t actually be in a calorie deficit.

Let’s break it down with math (don’t skip this part, I’ll keep the math simple, and this is arguably the most important part of the entire article).

Let’s say your Basal Metabolic Rate (which is simply how many calories your body burns per day at rest) is 1450.

And you chose an activity multiplier of 1.375, because you’re fairly active.  You’re on your feet most of the time for work, and walking around having a grand ol’ time.

So now your Total Daily Energy Expenditure (how many calories you burn daily in addition to your Basal Metabolic Rate) is 2,000.

You’re eating 1,750 calories a day, for an average weight loss of half a pound a week.

Your watch tells you you burned 600 calories from running a few miles.

You’ve now eaten 2,350 calories, which is 350 over your maintenance calories.

Now you’re in a calorie surplus for the day

This estimation is not always accurate (after all it is an estimation).

But there are ways to work around that.

What you need to do is be RUTHLESSLY CONSISTENT for 30 days.

Weigh yourself every single day.

When I say ruthlessly consistent,

I mean track every single thing that goes into your mouthhole.

Every ounce of chicken, every drop of olive oil, and every ice cube.

Weigh it all out, track it accurately.

Because 99.9% (made up statistic alert) of the time people aren’t losing weight in a calorie deficit, is because they either intentionally or unintentionally are not accurately reporting their calorie intake.

At the end of 30 days, if you were in a calorie deficit 25 out of 30 of those days and you have not lost weight, you may have overestimated your activity multiplier.  Drop it down a notch and repeat the process.

Well, if you’ve made it this far in the article, congratulations.

And now you know that eating back those exercise calories could actually be putting you in a calorie surplus causing you to gain weight.

So stop focusing on how many calories you burn.

And focus more on how many calories you eat.

It’s much easier to control and track.

Focus on that, and you will lose body fat.